in News, Racing January 13, 2017 Comments Off on Canberrans perform at National Titles 661 Views

Canberra riders were out in numbers at the Australian Road National Championships at the weekend, led by Nathan Haas (DDD / VCC) who edged his way onto the podium in the Men’s Road Race, and CBR Racing’s Em Parkes who took out the silver medal in the U23 category of the Women’s Road Race.

Out of the spotlight, many other Canberra riders achieved career best performances. Canberra Cycling Club’s Adam Phelan, finished a career-best 16th in the Men’s road race, racing without the support of a team in what has become his retirement race. Adam found himself without a Pro Continental contract for 2017 when Drapac Pro Continental Team announced it was winding up at the end of the year. Adam told Canberra Cycling Club “It was an epic race to finish my career with. And that’s exactly why I choose to compete in the National Championship for my final race of my professional career, it is always a tough and exciting day of racing in Ballarat. It was emotional to cross the line knowing that it was likely my last national championships, but I loved every minute of it and was nice to have Lachlan Morton, who I have raced with since I was 8, come up and shake my hand in the final kilometre and wish me well. ”

Also in the same race, Tim Cameron, formerly of Canberra Cycling Club and still a Canberra local, went in with the objective to ride in support of St. George Continental Cycling Team team leader Ben Dyball, but when Dyball made it into the break in the 9th lap (of 18), Tim found himself with enough legs left to finish the race for the first time, and in a respectable 33rd place. Dyball finished in 12th. “It was a great vibe down there all week… the mix of pain and the crazy crowds on the hill is an experience that I’ve had only in Ballarat”, said an elated Tim after the race. With a solid nationals result, Tim is hoping to be included on the St. George Continental roster for UCI 2.1 and 2.2 races in 2017.

Phoenix Cycling Collective sent a team of developing riders which included Nathan Booth (CCC), and Andrew McCosker (VCC) in the elite category, and Sam Hill (HDCC), and Will Barker (ANUCC) in the U23 category. Nathan completed an impressive 10 laps before retiring from the race. “The first part of my plan worked well, and I was able to hang in while other riders were dropping like flies on the KOM… Next year we’ll have a fairly large Phoenix contingent, so it will be much easier to get in plenty of recovery and hydration, which is key if you want to finish on Sunday.” Team manager, co-owner and team-mate Andrew McCosker spoke highly of Nathan’s first Nationals outing in the Elite category: “Nathan is a massive team player that (previously) supported Sam and Will in the U23 races… he gets affected by the heat really easily, so for him to last as long as he did was a massive achievement. It’s almost impossible to compete against the international tour riders at Nationals, but I was hugely proud of how the boys raced. The results sheet never tells the full story, particularly as the DNF’s aren’t listed in order of when the riders were dropped.”

Phoenix has continued its momentum to becoming Canberra’s top NRS & development team, recently expanding its roster to include a women’s team, and is expecting to announce new sponsorship for 2017 in the coming weeks. As Phoenix team co-owner and Marketing Manager, Michelle Balaz explained, “this will allow the team to use existing funds from Vixen PR to sponsor local races. We are focussed on promoting cycling in the ACT region and to have fun racing interstate as well as the NRS. A number of pretty strong and smart riders have chosen to ride with us in 2017, so the team will be targeting a few podium placings throughout the year, but out main aim is to race as a cohesive unit on the road and work for each other.”

Canberra Cycling Club athlete, and former track world champion Rebecca Wiasak put in a couple of solid performances, just missing out on a podium place in the Time Trial and finishing 10th in the Road Race. CCC / Specialised Women’s Racing rider Lucy Bechtel was the best placed Canberran in the criterium and may have gone on to do the same in the road race, if not for a puncture at a crucial time. Closely following her was former Australian Criterium Champion and, more recently, CCC Bravien Dash For Cash winner, Kimberly Wells (CCC). Kimberly rode without the support of a team at this year’s race, having given up her place on the High5 Dream Team to focus more on her career as a doctor.

Canberra’s star two-time Australian Road Champion and Orica-Scott rider, Gracie Elvin, has made no secret about her spring classics goals for 2017, relegating her Ballarat weekend to one of training and team-support. “I went to Ballarat with no pressure or expectations and was pleased with how I performed” said an upbeat Gracie after the Road race. “It was fun to be part of my team’s success of taking out all of the senior titles as well as two U23 titles. It’s (also) great to see many local riders having a real crack and improving their fitness and racing skills at this time of the year. (Personally,) I’ve been slowly building up fitness since my big Olympic experience in 2016 (and now) I’m aiming to peak for the Tour of Flanders.” To do this, Gracie will have to cover a longer and harder edition of the Belgian spring classics race on 2nd of April, which, in addition to the numerous cobbled sectors and increased amount of climbing, has been stretched out to 153km, up from last year’s 140km, thanks to a change in UCI maximum distance regulation. Gracie has been a regular at Canberra Cycling Club’s popular Summer Criterium Series over the years and says this played an important part in her development. “I got so much out of racing against top riders in Canberra when I was younger, so I always welcome any rider wanting to improve to come and have a chat or even just follow me around in the local crits.”

Speaking about husband, Stu Shaw, Gracie says he “did well to turn some bad luck around to have a great showing in the (Australian) Nationals criterium”. In the leadup to the Roadnats week, Stu and Gracie both found themselves without a road bike to train on after an airline lost their baggage. “Stu’s bike (eventually) arrived broken and he wasn’t able to ride a road bike until the day of the race! His team came through with a beautiful new Trek and he had a solid ride for 15th (place) in a heavily stacked field.” Ben Hill (CCC / Attaque Team Gusto) was the best-placed Canberran in the criterium, finishing in an impressive 8th position, behind winner Caleb Ewan (Orica-Scott).

Author’s note: We have sought to include all Canberran riders above. Should we have inadvertently missed you, please feel free to get in touch and we can include you. Unfortunately, the results sheet don’t make it easy to pick out Canberra riders. 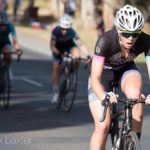 Kimberley Wells on the attack in the criterium. Photo: Kirsty Baxter 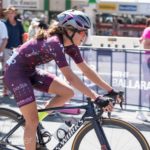 Lucy Bechtel was the best placed Canberran in the Women’s Criterium, and was having a strong Road Race until an untimely puncture Photo: Kirsty Baxter 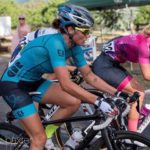 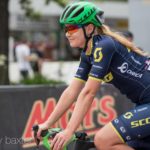 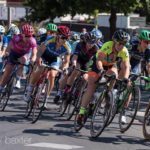 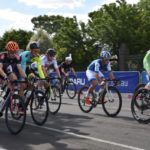 Sam Hill showed his aggression in the U23 Mens Criterium, launching attacks from the bunch like this one Photo: Vixen PR 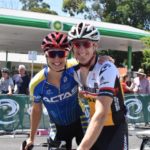 Rebecca Wiasak and Ben Hill at the start of the Road Race on Sunday. Photo: Vixen PR

Em Parkes took the silver medal in the U23 category of the women’s criterium. Photo: Kirsty Baxter 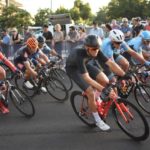 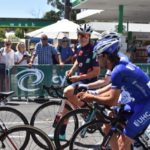 Adam Phelan at the start of the road race. Photo: Vixen PR Nathan Hass heading to sign on at the start Photo: Vixen PR