Beautiful conditions greeted riders for Round 4 of the CCC Summer Crits with just enough breeze to make things interesting for the escape artists and opportunists.

Archer Peppinck upended the usual script in the Junior HC, foregoing the bunch sprint in favour of a long-range attack with a well-executed move two laps from the finish. Catching Annika Astridge off-guard as she rolled her turn, Archer danced on the pedals through bottom corners, building a solid lead and TT’ing his way to a solo victory. Annika fought all the way but couldn’t quite get back on level terms, rolling home in second with a gap to the chasing bunch led home by Hugo Williams and Quinn Peppinck.

B Grade saw a huge field scrapping to establish an early break with Cartel protagonists David Parker and Robert Jeffries prominent early. But life in the wheels was proving considerably easier than life in the wind as attack after attack failed to gain a margin. Em Viotto made her presence felt with an attack down the home straight while Dennis Mungoven looked to inspire a father-son escape with son Eddie mid-way through the race. Altogether on the bell, Seb Muller put in a huge effort to open a decent gap down the home straight, Matt Corby digging deep to edge his way back onto Seb’s wheel exiting collarbone. As the lightning pace came out of the attack down the back straight, Brad Peppinck and Rainer Wilton seized the initiative pulling clear and allowing Rainer to open his winners account for the season with a well-timed sprint, Brad in second and Dennis a deserving third. Em Viotto finished with the bunch gallop to nab first for the women, Lauren Bates coming home second as several other contenders opted to keep their energy reserves topped up for round one of the Women’s Series.

A Grade made for another cracking spectacle with lots of aggressive racing, Dylan Hopkins splitting the bunch early and forcing Club President Steve Crispin to stitch things back together. Oscar Chamberlain was guilty yet again of keeping the pace high while Tom Chester riding his ‘big boy’ wheels clearly meant business towards the front of proceedings. Over the next twenty minutes, Ayden Toovey, Reece Tucknott, Toby Stewart, Fintan Conway, and Campbell Jones all tried their luck, Olivers Real Food Racing working well together to disrupt the flow. Not to be outdone by the President’s antics, however, Club Captain Macca Edwardson went clear with Tom C down the back straight in what looked like it might be the winning move. Ayden T clearly thought so burning several matches with an impressive show of force to ride across the gap, only to have Dylan H empty the tank and bring it all back together with two laps remaining. Reece had more left to give driving six riders clear on the bell, Tom being lent on to neutralise the threat and Macca piloting Ben Hill through the chaos. Anyone’s race coming onto the home straight, Oscar lit the jets propelling himself well clear and looking like he enjoyed a dominant victory, Macca holding on for second with Ben in third for CCS.

Round One of the Women’s series saw a watchful A/B Grade bunch during the early stages, Kim Pederson never far from the front. Content she’d seen enough, Josie Pepper was the first to really string things out with a strong attack, the first of many for the night. Inez Cashman was also willing to work and the two set to upping the pace, the ACTAS riders well positioned and attentive not to let anyone dangerous edge away up the road. Kim Pederson was also willing to try her hand with several surges down the home straight but no one was able to make it stick. As the race entered the closing stages, Lauren Bates and Claudia Marcks combined to punch clear, catching Josie Pepper momentarily off guard. The ACTAS duo established a handy lead before Josie managed to claw her way back and set up the podium for Round One with just the order to be decided. Outnumbered, Josie rode well in the final stages with the ACTAS riders, clearly confident in their sprints, unperturbed about bringing her to the line. So it was, that confidence proved well placed as Claudia stormed out of the top corner to a victory that never looked in doubt, Lauren coming home second and Josie in third. The C/D bunch meanwhile stayed largely intact, despite Sophie Champan and Lyn Vasudeva’s best efforts to drive the pace. In the end, Belinda Chamberlain had the watts to get the job done winning the bunch kick ahead of Lucy Skeldon and Sophie C.

And so, it fell to C Grade to bring the curtain down on a great night of racing with the light and temperature rapidly dropping. Heath Chester was active early although seemed to think better of pushing on alone with some way still to go. John Bridge also had a strong showing on the front setting the pace during the opening laps with Pete Rodgers always well positioned near the head of affairs. All signs were pointing strongly towards a bunch gallop, however, and so it proved to be the case, Angus Withington winning convincingly with another strong show of form ahead of Samuel Playford and Ben McDuff.

Round Four done and dusted, thanks as always to the Comms and Volunteers – from those down on track to those working the rego desk, the first aid officers and those behind the scenes – you make the racing possible. Legs now nicely warmed up and form being carefully honed in the run up to Christmas Crits, the next few rounds are sure to be exciting. Make sure you get along, either on the track or as a spectator, and thanks for your continued support to making the CCC Summer Crits such a great series. 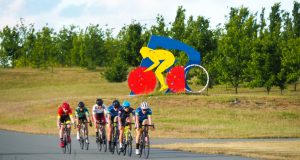 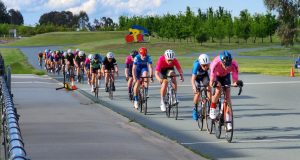 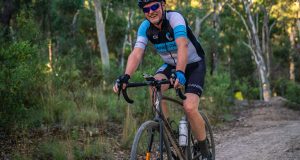