Riders will head down to Uriarra Crossing, doing a U turn before the descent. Return and turn right on to Mountain Creek Rd. Riders will do a U turn 3.6kms from the turn (just before the NSW border) and return to the start/finish area. Each lap is approx. 15km 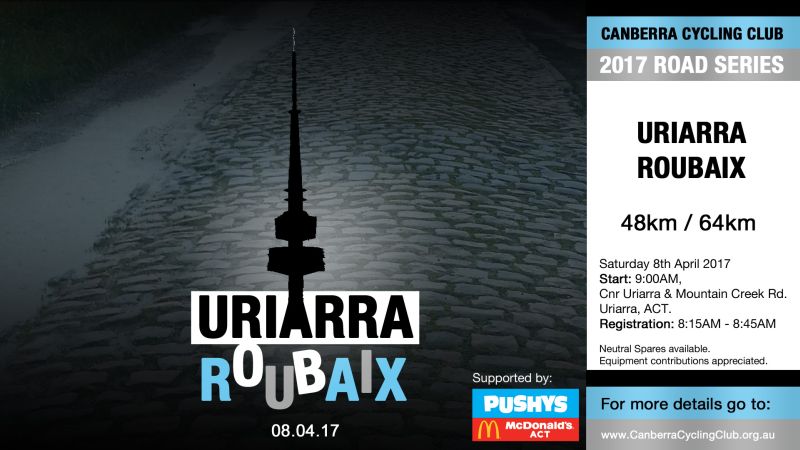 It was a strong turnout for Uriarra Roubaix 2017, a race which we hope is gaining momentum and aim for it to become a cornerstone event in the future. The support of Pushy’s Fyshwick support vehicles and mechanics was used by many riders, especially in the first lap. Mountain bikers turned out in force today and despite being on road bikes, largely showed up their roadie counterparts.

Tiffen Cycling, Sean Whitfield (CCC / Olivers), Allan Sieper (Tiffen Cycling), Jeremy Ross (Tiffen Cycling) and  Will Barker (ANU / Phoenix) started the attacks from kilometre zero in A Grade. Both Sean and Will suffered mechanical issues on the first dirt sector leaving Allan and Jeremy out in front. Urgency in a chasing peloton which did not want to give them distance caused a catch half way into the second dirt sector at around 27km covered. A few punctures thinned the bunch down whilst reigning Australian XCM (that’s mountain bike cross country marathon) Champion Brendan Johnston made a quick decision to react to the catch with a long-range attack, with just over 30km remaining. Almost the same distance from which Fabian Cancellara attacked from to win Paris-Roubaix in 2010, after which he became the first high-profile “mechanical doping” accusation. Pushy’s mechanics didn’t have any motor-detection equipment on hand, so we can only assume that, like Cancellara, the motor is in his legs. Only Tristan Dimmock (CCC) could follow Brendan’s attack, but with 25km to go, Brendan still had too much battery remaining and solo-ed to the finish from there. The small chase groups found themselves unable to make up substantial time and Marc Williams (CCC) managed a small time gap on Al Sieper (Tiffen / CCC) to take third.

A combined Men’s B Grade, C Grade and Women’s A Grade group started tamely. The pace picked up on the first dirt sector with a few riders testing out their competition’s dirt form. A flat front tubular tire and subsequent front wheel lockup put me out of the race in Team Sky style, just without the broken wheel (if you missed the intriguing TTT footage from Tirreno Adriatico this March, you can check it out here: https://cyclingtips.com/2017/03/team-sky-and-the-mystery-of-the-exploding-wheels-at-tirreno-adriatico/ ). Meanwhile, the stronger riders in the group were trying to put their foot down to break up the field. Reigning Australian MTB champion and Commonwealth Games bronze medalist Bec Henderson (CCC) stayed away with (and out-sprinted!) Todd Sowter (CCC) to bring in the day’s second A grade win for mountain bikers, while Em Viotto (CCC) and Paul Aubrey (CCC) came in together at 55 seconds down on their respective grade winners. 15 year old Dylan Hopkins (CCC) has been in rising form lately and deserves a special mention for taking 3rd place in B Grade. Rounding out the top 3 for Women’s A grade was former Australian (MTB) Champion, Jenny Blair.

C Grade raced together with B Grade and were able to match it with their upper grade counterparts, as mentioned above, it was the Women’s A Grade riders in the group who took control of the day. Well done to Matt Hinchcliffe (CCC, 1st), Zac Collins (UQCC, 2nd), and Alexander Newman (CCC, 3rd).

D Grade also started with a slow warm-up pace on the asphalt. A brief surge at the first turn-around cone caught some off guard momentarily, but the first serios attack came at the first dirt sector when Anthony Willis (CCC) launched an early attack. He was chased down by the peloton only a few kms later on the asphalt. The race then blew completely apart on the second dirt sector, after which strategic groups started to form on the Asphalt. Oscar Chamberlain (CCC) looked to have 2nd place sewn up when Simon Pellatt (CCC) “came back from nowhere” to relegate the 12 year old to third. Raeleigh Rogers (CCC) partnered strategically with Steve Byrne (VCC) to take out Women’s C. Perhaps there was just enough soft-pedalling in the pair, as they did not manage to stay with Rae’s son Cameron Rogers (CCC), who won Men’s E Grade. Anthony Willis powered away on the second (of 3) dirt sectors. As a keen XCM National Series competitor (in the “super masters” category), he said he thinks “it may have helped a bit”. Noa Millman (CCC) deserves a special mention, not only for winning Women’s B Grade. The U19 rider also finished within reach of the Men’s D winners.

But being a top mountain biker was no guarantee today. Down on the DNF list was Dan McConnell (CCC) – MTB Commonwealth Games medalist and Australia’s only MTB World Cup winner since Cadel Evans.

Hope you enjoyed the race. Apart from tomorrow’s CORC race, the next race will be a handicap at Lookout Hill on 23rd April and Gordo will be back from his cruise to be Race Director. The following week (28-30 April) is the Canberra Junior & Women’s Tour which will feature a TT, Crit, Kermesse and Road Race. If you’re Women’s A or B, or U19 or younger, the Tour is one of the top events on the calendar. U19’s are back in the Tour this year for the first time in a long time – please help to spread the word to any U19’s!

I’m keen to get your feedback about today and will be in touch soon with a short survey. Otherwise, why not come on the CCC Recovery Ride and have a chat about, well, anything.

THE COURSE PROFILE CAN BE VIEWED AT THE ABOVE LINK

AN AUSTRALIAN APPROVED HELMET MUST BE WORN IN THE RACE

NEW MEMBERS CAN REFER TO THE FOLLOWING LINK TO FIND HOW TO JOIN CCC https://www.canberracyclingclub.org.au/membership/

ALTERNATIVELY A THREE RACE PERMIT CAN BE PURCHASED ON THE DAY FOR $52. WE ARE NOW PAPERLESS AND RELY ON NETWORK COVERAGE FOR NEW MEMBERS TO REGISTER ONLINE VIA https://eventdesq.sportstg.com/index.cfm?fuseaction=main&EventDesqID=14967&OrgID=4912

UPCOMING RACES CAN BE FOUND AT https://www.canberracyclingclub.org.au/calendar-list/

DISC BRAKES: The use of Disc Brakes is prohibited at CCC events. Club insurance won’t cover an accident that involves disc brakes. Please read the below quote from Cycling Australia.
“CA’s Tech Reg’s do not provide provision for the use of disc brakes in road races and will not be updated to include them at this time. In the latter half of 2015 and early 2016 the UCI trialled their use in sanctioned events. The outcome of this trial period saw the UCI make a determination not to allow any further use of disc brakes in road competition events. During this trial period CA was not trialling the use of disc brakes in any domestic road event and through the period their use was not allowed according to CA technical regulations and this position remains.” 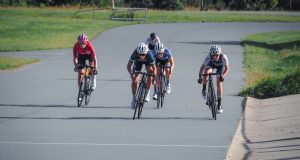 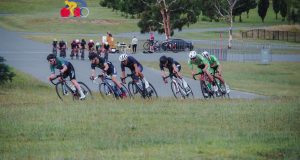